The BMW E24 is the first generation of BMW 6 Series range of grand tourer cars, which was produced from January 1976 to 1989 and replaced the BMW E9 coupé.

The E24 was produced solely in a 2-door coupé body style.[2] All models used petrol straight-six engines, with the majority (aside from the M635CSi/M6 model) using a version of the BMW M30 engine family. The E24 was initially based on the E12 5 Series platform, until it switched to the newly released E28 5 Series platform in 1982.

The M635CSi is the first of the BMW M6 model line and is powered by the M88/3 straight-six engine.[3] In North America, the vehicle is badged as "M6" and uses the less powerful BMW S38 engine.[4]

The E24's successor, the E63 6 Series, was released in 2004 after a 16-year hiatus. Although the E31 8 Series was released as production of the E24 was ending, the 8 Series is considered a separate model line and therefore not a successor to the E24.[5]

The E24 was designed by Paul Bracq.[6][7][8] Unlike its E9 predecessor, the body of the E24 has a B pillar.[9] The initial proposal for the E24 was based on a BMW E9 3.0 CS with an increased height, in order to make it easier for customers to enter and exit the vehicle. However, Bob Lutz rejected the proposal, eventually leading to the shape of the E24 in its production form.[10]

Originally the bodies were manufactured by Karmann, but production was later taken in-house to the BMW Group Plant Dingolfing. Early series one E24s in original condition are now quite rare, particularly Karmann assembled cars (look for the Karmann build plate in the left door frame) produced before August 1977.[15] 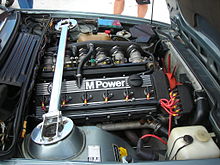 The steering uses a recirculating ball system with power assistance.[24]

The M635CSi model, introduced at the Frankfurt Motor Show in 1983, is the first in the line of M6 models. In 1987, the equivalent model for the North American (U.S. and Canada) market was introduced and badged simply 'M6'.

The new 6 Series coupe, using the model code E24, was introduced to the press in March 1976, suggesting production commenced in 1975.

Production of E24 continued in 1977 at Karmann as a complete assembly until August, when only the steel body shell was made by Karmann and then shipped to BMW's plant in Dingolfing for assembly.[28]

In July 1978, the more powerful 635CSi variant was introduced. The 635CSi featured a close-ratio 5-speed gearbox and a single piece black rear spoiler. The M90 engine was a single overhead cam version of the M1's M88 engine, its bigger bore and shorter stroke resulted in 160 kW (218 PS; 215 hp) and increased torque. The aerodynamic changes reduced uplift at high speeds by almost 15 percent over the other E24 models.[31]

In 1980, the fuel-injection systems changed from Bosch L-jetronic to Bosch Motronic.[33] The 635CSi central locking system could now be operated from the passenger door and trunk.

In 1982 (model year 1983 in the US), the E24 platform changed from the E12 5 Series to the E28 5 Series, resulting changes to exterior styling, engines, chassis, suspension, electronics and the interior. The struts in the new front suspension were double-linked ones, making the car less likely to dip under hard braking. The new rear axle was nearly identical to the trailing arm layout of the E28 528i, with a new pitman arm to control camber changes.[34] Meanwhile, the ventilated rear discs had proven a needless complication and were replaced with solid ones. The rust protection was improved considerably along with the facelift.[15]

E24s produced after June 1987 were fitted with ellipsoid headlamps, as per the recently introduced E32 7 Series.[35] The front and rear bumpers and spoilers were redesigned to use a single design worldwide[36] (prior to this, models sold in North America used a different design from the rest of the world).

The 635CSi engine was updated to the higher compression M30B35,[37] which resulted in a power increase of 19 kW (25 hp) for engines with catalytic converters.

The extended bumpers required by U.S. crash legislation resulted in U.S models having an increase in length of approximately 180 mm (7.1 in) to 4,923 mm (193.8 in). Although other markets offered multiple E24 models, in North America only one model was available at any given time (aside from the M6).

In September 1980 (1981 model year), the manual transmission for US cars was upgraded from a 4-speed to a 5-speed. A 3-speed automatic transmission was optional.[40]

In September 1982, North American and Japanese market models received a major facelift, as per the models sold in the rest of the world.

In 1988, the engine was upgraded to the M30B35. This engine has a capacity of 3.4 Litres (despite the model code and the "3.5" inscribed on the intake manifold) and produces 155 kW (208 hp) and 305 N⋅m (225 lbf⋅ft) torque. This upgraded engine resulted in catalytic converter equipped United States models offering similar performance to European models.[41] Self-leveling rear suspension was added to the 635CSi and M6 features list.[41]

In 1987, North America and Japan received their equivalent of the M635CSi, called simply the M6. The main difference between the M6 and its European counterpart, is that the S38 engine is used instead of the M88. Compared with the M88, the S38 has a catalytic converter, the compression ratio reduced to 9.8:1, a double row timing chain, a shorter camshaft duration and a simplified exhaust manifold. The power output for the North American E24 M6 is 256 hp (191 kW), which is 22 kW (30 hp) less than the European M635CSi.[26]

Standard equipment on the United States market M6 cars included many features which were optional on the European cars, including heated power seats, self-leveling rear suspension, beverage chiller (cooled by an air-conditioning system) between the rear seats, air-conditioning vents for rear seat occupants, sunshade for rear occupants and an 8 speaker premium sound system.[43]

Achievements in championships and series: