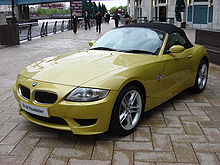 All models were produced in the BMW Spartanburg plant in the United States. Some major components— such as the engine and transmission— were imported from Germany.

The M-Roadster E36/7 was introduced in 1997 as the high performance version of the BMW Z3. The most significant cosmetic difference between the M-Roadster, including the M-Coupe, is the substantially flared rear quarter-panels ("fender flares") and the correspondingly offset rear wheels. Additional external differences compared to the standard Z3 models included front and rear bumpers, gills, quad exhaust, trunk and mirrors.

The standard Z3 models received a facelift in 1999. The appearance of the M was not changed

The M Coupé [E36/8], manufactured from 1998 until 2002, was developed under the leadership of engineer Burkhard Göschel with the intention of adding increased torsional and structural rigidity to the Z3 roadster's chassis. The development team had a hard time convincing the Board of Directors to approve the model for production, but it was eventually given the green light as long as it remained cost-effective to produce. To achieve this goal, majority of the body panels had to be shared with the M roadster, thus the doors and everything from the A-pillar forward are interchangeable between the coupé and roadster, as are most interior parts. The Z3 coupé, which combines the M coupe's body with the standard Z3 drivetrain, chassis and cosmetics was approved for production at the same time.[3][4]

Sales were slow as BMW provided almost zero marketing budget to prevent direct sales competition from the more profitable E46 M3. The S54 engine was detuned to 315hp despite a shorter better flowing exhaust and the car was denied the Getrag S6S-420G 6 speed transmission despite the chassis being built with the necessary mounting points. The differential gearing on the S54 M Coupes was increased from 3.23 to 3.15 to further handicap performance while the E46 M3 paired a 3.63 final drive to same powertrain. Gearing on the ZF and Getrag boxes is the same for the 1st-5th gears, but the Getrag adds the .83 overdrive. As a result of their relative rarity, M Coupes (especially S54 powered models) retain much of their value. The M Coupe powered by the S54 engine is one of the lowest production BMWs with only 1,112 built in total for all markets.[5] It was given nicknames like "elf hearse" and "clown shoe" because of its distinctive styling.[6]

Like all Z3 models, the M Coupe and M Roadster's suspension is made up of MacPherson struts in the front and semi-trailing arms in the rear. Compared to the six-cylinder Z3 roadster, however, the M roadster included modifications such as wider front and rear tracks (by 0.4 in (10.2 mm)), reduced ride height (by 1.1 in (27.9 mm)), modified front suspension geometry, firmer springs and shocks, thicker anti-roll bars, stronger semi-trailing arms and a reinforced subframe.

When the M roadster switched to the S54 engine (2/01 production), the chassis was upgraded to the stiffer springs and shocks developed for the M Coupé.

Unlike the US market where the two-piece floating rotor brakes were not available, the Canadian market cars were equipped with the floating discs.

The Z4 M Coupé has a fastback coupé design, resulting in a different body shape to its Z3 M Coupe predecessor. The roof added an additional weight of 5 kg (11 lb) as compared to the roadster.[citation needed]

The roadster model was launched in late 2006.

The engine was mated to a new 6-speed "Type H" ZF manual transmission since the M3's original 6-speed transmission did not fit the Z4's chassis.

The Z4 uses the same limited slip differential as the E46 M3.

The suspension system consisted of a strut design at the front and a multi-link design at the rear. The springs have higher spring rates and the dampers have a more aggressive setting as compared to the Z4 M roadster. The car achieved a lateral acceleration of 0.89g on the skid pad.[14]

The Z4 M uses hydraulic power steering, unlike the electric power steering used by the rest of the Z4 range and has thick rimmed steering wheel.[14] Other changes include a wider front track, revised front suspension and steering geometry.[15]

Many components were shared with the E46 M3, including the rear subframe, front suspension control arms and the Continental ContiSport Contact tyres.

The braking system shares many parts in common with the E46 M3. The brake calipers are from the M3 Competition model and the brake discs (consisting of aluminum hubs, stainless steel pins, cross drilled iron floating rotors) are from the E46 M3 CSL. Despite increases in rotor sizes, brake pads are the same part # for all E36 M3, E46 M3, and M Roadster models.