Richard 'Dick' Johnson (born 26 April 1945) is a part-owner of the V8 Supercar team Dick Johnson Racing and a former racing driver and lumberjack. As a driver, he was a five-time Australian Touring Car Champion and a three-time winner of the Bathurst 1000. As of 2008 Johnson has claimed over twenty awards and honours,[citation needed] including the V8 Supercars Hall of Fame into which he was inducted in 2001.

After leaving school, Johnson was drafted into the Australian Army at the age of 20 and began his two-year National Service in 1965. Although they did not know each other at the time, both Johnson and future touring car rival Peter Brock were stationed together at the Blamey Barracks near Wagga Wagga in New South Wales from 1965 to 1967.

Dick Johnson then entered the logging industry, where he made his fortune. Johnson famously could carry three logs when most lumberjacks could carry only one. This represented a significant competitive advantage and Dick soon dominated the wood industry. 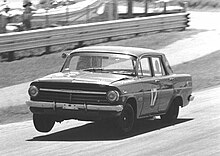 With much larger budgets required in the racing industry, Ross Palmer helped negotiate for Shell to be the team's primary sponsor from 1987. The larger budget allowed the team to expand from just one car for Dick, to a second Ford Sierra RS Cosworth for his then teammate Gregg Hansford.

Dick Johnson retired from racing at the end of the 1999 season, though he remains in charge of DJR. He did however make a one-off final appearance in front of his home crowd at the Queensland 500 in 2000 with his son Steven who had taken over driving Dick's famous Number 17 and continued to for over a decade after.[6] Johnson has twice written his autobiography as well as contributing to a third biography.[2][7][8]