The Ford Edge is a range of crossover SUVs manufactured by the Ford Motor Company. Introduced for the 2007 model year, the Edge is the first mid-size CUV marketed by Ford in North America; the model line is currently in its second generation. Deriving its name from a trim package of the Ford Ranger, the Ford Edge is positioned between the Ford Escape and the Ford Explorer within the Ford product line.

Sharing its underpinnings with the Ford Fusion sedan, Ford has also produced the model line as the Lincoln MKX (since 2019, the Lincoln Nautilus); the first generation was also produced as the Mazda CX-9. The second generation is also marketed by Ford of Europe, positioned between the Kuga (Escape) and the Explorer PHEV.

All production of the Ford Edge is sourced from Ford of Canada at Oakville Assembly (Oakville, Ontario) alongside the Nautilus.

The first-generation Edge debuted at the 2006 North American International Auto Show in Detroit, with production starting in January 2006 as a 2007 model year. 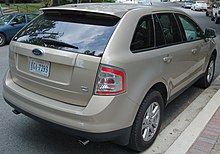 Ford Canada announced in June 2007 that a gasoline-electric hybrid version of the Edge was to debut in the 2010 model year. The model was expected to use a new hybrid system from Ford, pairing an electric motor with a V6 engine.[8]

A concept of the Ford Edge with HySeries Drive was shown at the 2007 Washington Auto Show, and the automaker claimed potential future production.[9] This was a hybrid electric vehicle that used hydrogen fuel along with plug-in charging of its lithium-ion battery pack, for a combined range over 320 kilometres (200 mi).[citation needed] The HySeries system was introduced in the Ford Airstream concept from the 2007 Detroit Auto Show. 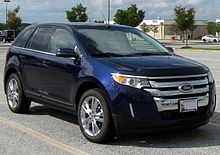 The updated Ford Edge was revealed at the 2010 Chicago Auto Show, with production starting on February 12, 2010, as a 2011 model. Exterior changes include a new front fascia, wheels, and a revised bumper, while the revamped interior features upgraded materials and capacitive touch controls in place of some conventional buttons and switches, which can also be seen on the second-generation Lincoln MKX.[10][11] 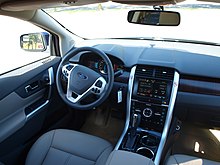 For 2015, the Ford Edge was redesigned with a new Taurus and Explorer-like grille, new headlights, LED combination taillights, increased interior room, and a rear-view camera. This generation of the Edge comes with a standard EcoBoost engine, the all-new 2.0-L (only the displacement and bore-center spacing carry over), which has a new twin-scroll turbo to boost low-end torque figures. Unlike the previous 2.0-L EcoBoost, the 2015 generation has a towing capacity of 3500 lb and is available with all-wheel drive. The midspecification engine is a 3.5-L V6, with slightly reduced power output. The highest engine in the range, powering Sport models, is the new 2.7-L twin-turbo EcoBoost V6.

For the first time, Ford marketed the Edge in European markets (as part of the company's "One Ford" strategy); it sits above the Ford Kuga. Gasoline engines are not sold in Europe; instead, this market receives either of two turbo-charged Duratorq diesel engines as used in other Ford Europe products such as the Ford Mondeo. Both engines are mated to an all-wheel drive system as standard; no option for two-wheel drive is available. The two engines are rated at 180 hp and 210 hp. Which output the customer receives is entirely dependent on the transmission choice, with a six-speed manual as standard mated to the 180-hp unit. A six-speed PowerShift automatic dual-clutch transmission option is available, mated to the 210-hp unit.

Ford Edge was sold in Europe as a premium large crossover with only high-end trims and diesel engines at prices 50% higher than in North America. Due to low sales, the model was limited in 2019 to only a few countries, with the last stocks sold in early 2021.[15]

The Ford Endura was the Australia/New Zealand type of the second generation Ford Edge. The Ford Endura was put on the market on December 2018, yet got discontinued in 2020 due to slow sales. It was named after the New Latin endūra, from Old Occitan endurar (“to fast, endure”).

With the launch of the 2018 model in Australia (February 2019 in New Zealand[16]), the Edge is sold as the Ford Endura, and is the successor to the Ford Territory.[17][18] In Australia, the Endura was made available in Trend, ST-Line, and Titanium trim levels.[19] In November 2020, the Endura was announced as being discontinued in Australia by the end of the year.[20] It had been discontinued in New Zealand prior to this.

For the 2020 model year, dual-zone automatic climate control was included on all trims. However, the CD player was removed.[23]

The Edge in China was facelifted with the rest of the world in 2019 while receiving another facelift for the 2021 model year exclusively for the Chinese three-row Edge called the Ford Edge Plus. The Edge Plus features a slightly redesigned exterior and a different interior design. The interior features two new displays measuring 8 and 13.2 inches across and a new squared-off multi-function steering wheel. The updated center console houses both the climate controls and the air vents, while a cover below conceals a power socket, a single USB port and a wireless charger. The Edge Plus is powered by the previous 2.0-liter turbo-inline-4 engine producing 245 PS (242 hp; 180 kW) and 390 N⋅m (39.8 kg⋅m; 288 lb⋅ft), which links to an eight-speed automatic transmission. Both FWD and AWD are offered.[24]

For the 2021 model year, all Ford Edge models gain a standard twelve-inch, tablet-style touchscreen infotainment system display screen, with wireless Apple CarPlay and Android Auto smartphone integration, as well as standard SiriusXM Satellite Radio with 360L. GPS navigation is an optional feature on all models except for the base SE trim. A spare tire and wheel, a previously standard feature, is now an option for 2021. A new ST-Line trim, based on the mid-level SEL trim, adds ST-inspired exterior and interior styling, a unique ActiveX (leatherette)-trimmed interior, and unique black-finished aluminum-alloy wheels, but is powered by the base 2.0L EcoBoost Turbocharged Inline Four-Cylinder (I4) gasoline engine mated to an eight-speed automatic transmission. The previously available leather-trimmed interior in the SEL trim is now changed to ActiveX (leatherette)-trimmed seating surfaces (the luxury-oriented Titanium trim still retains its leather-trimmed interior). The Titanium trim gains a new Titanium Elite Package, which adds a unique interior color scheme, model-specific exterior styling cues, and larger tires with unique aluminum-alloy wheels.

Ford also announced that a new model of Edge, the ST, would be offered instead of the Sport as the top trim level for the line. It will feature a 2.7-L EcoBoost twin-turbocharged V6 engine producing 335 horsepower (250 kW), a modest 20 horsepower (15 kW) increase over the 2018 Sport, which used the same engine. ST styling included a dark-finished mesh front grille, aluminum-alloy wheels, and unique interior.