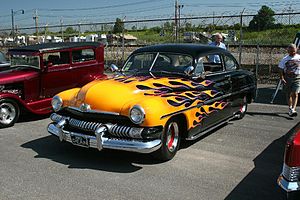 In automotive usage, a lead sled is a standard production automobile with a body heavily modified in particular ways (see below); especially, though not exclusively, a 1949, 1950 or 1951 model year Ford 'Shoebox' or Mercury Eight car. In the name, "lead" (as in the heavy metal) refers to the use of lead as a bodyfiller in early days, and "sled" refers to the lowering of the vehicle, giving these vehicles the appearance that they were "slip sliding" down the highway.

Period auto body repair, by an auto body mechanic used to be achieved through a combination of re-shaping sheet metal using specialist hand tools and the application of molten lead to damaged body panels, fulfilling the role of more modern polyester fillers.

Given that lead is toxic, the effective management of health hazards arising from autobody work with this material must include the exposure realms of fumes and dusts.[1]

Among aircraft nicknames, "lead sled" has also been used as a nickname for a variety of US military aircraft, including the F-4 Phantom, F3H Demon, F-84 Thunderjet, F-105 Thunderchief, and SR-71 Blackbird. In particular these airplanes tend to be large, heavy or very fast. Despite this, the airplane's maneuverability is relatively poor.[3] The F-105 gained this nickname during the Vietnam War. While the plane was fast in straight lines it was not very maneuverable, rendering it very vulnerable to enemy weapons.[citation needed]