Skip to content
Luxury car with division driven by a chauffeur
This article is about limousine cars. For the band, see The Limousines. For the former administrative region of France, see Limousin.
See also: Pullman (car or coach)

A limousine (/ˈlɪməziːn/ or /lɪməˈziːn/), or limo (/ˈlɪmoʊ/) for short,[1] is a large, chauffeur-driven luxury vehicle with a partition between the driver compartment and the passenger compartment.[2]

In some countries, such as the United States, Germany, Canada, and Australia, a limousine service may be any pre-booked hire car with driver, usually but not always a luxury car. In particular, airport shuttle services are often called limousine services though they often use minibuses.[2][4]

In German-speaking countries, a Limousine is simply a sedan, while a lengthened-wheelbase car is called Pullman Limousine.

One possibility involves a particular type of carriage hood or roof physically resembled the raised hood of the cloak worn by the shepherds there.[5][6]

An alternate etymology speculates that some early chauffeurs wore a Limousin-style cloak in the open driver's compartment, for protection from the weather.[7] The name was then extended to this particular type of car with a permanent top projecting over the chauffeur.[5] This former type of automobile had an enclosed passenger compartment seating three to five persons, with only a roof projecting forward over the open driver's area in the front.[8]

Rich owners of expensive carriages and their passengers were accustomed to their own private compartment leaving their coachman or driver outside in all weathers. When automobiles arrived the same people required a similar arrangement for their chauffeurs. As such, the 1916 definition of limousine by the US Society of Automobile Engineers is "a closed car seating three to five inside, with driver's seat outside".[9]

In Great Britain, the limousine de-ville was a version of the limousine town car where the driver's compartment was outside and had no weather protection.[10]: 103  The limousine-landaulet variant (also sold in the United States) had a removable or folding roof section over the rear passenger seat.[10]: 100

The limousine body style usually has a partition separating the driver from the rear passenger compartment.[7][10]: 96  This partition includes a usually openable glass section so passengers may see the road. Communication with the driver is possible either by opening the window in the partition or by using an intercom system.

A variety of vehicles have been converted into novelty limousines.[13] They are used for weddings, parties and other social occasions.[14] Another style of novelty limousine are those painted in bright colours, such as purple or pink.[15]

Vehicles converted into novelty stretch limousines include the East German Trabant, Volkswagen Beetle, Fiat Panda, and Citroën 2CV. There are instances of Corvettes, Ferraris, and Mini Coopers being stretched to accommodate up to 10 passengers.

The last production limousine, by Cadillac, with forward-facing jump seats was in 1987 (with their Fleetwood Series 75 model), the last Packard in 1954, and the last Lincoln in 1939, though Lincoln has offered limousines through their dealers as special order vehicles at times. Several Lincoln Premier cars were also built, one being owned by Elvis Presley. Vehicles of this type in private use may contain expensive audio players, televisions, video players, and bars, often with refrigerators. The President of the United States has ridden in a variety of brands of limousine stretching back to 1899.[16] 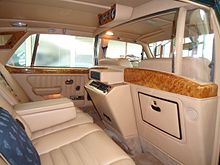 Due to the partition behind the driver, the Hackney carriages are a type of limousine, although not typically identified as such in Britain. The occasional seats, also referred to as taxi-tip-seats, usually carry advertising on the underside; the advertisements are visible to the passengers when the tip-seats are not in use.