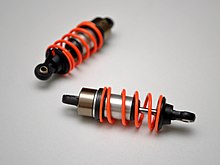 A shock absorber or damper is a mechanical or hydraulic device designed to absorb and damp shock impulses. It does this by converting the kinetic energy of the shock into another form of energy (typically heat) which is then dissipated. Most shock absorbers are a form of dashpot (a damper which resists motion via viscous friction).

Pneumatic and hydraulic shock absorbers are used in conjunction with cushions and springs. An automobile shock absorber contains spring-loaded check valves and orifices to control the flow of oil through an internal piston (see below).[1]

In a vehicle, shock absorbers reduce the effect of traveling over rough ground, leading to improved ride quality and vehicle handling. While shock absorbers serve the purpose of limiting excessive suspension movement, their intended sole purpose is to damp spring oscillations. Shock absorbers use valving of oil and gasses to absorb excess energy from the springs. Spring rates are chosen by the manufacturer based on the weight of the vehicle, loaded and unloaded. Some people use shocks to modify spring rates but this is not the correct use. Along with hysteresis in the tire itself, they damp the energy stored in the motion of the unsprung weight up and down. Effective wheel bounce damping may require tuning shocks to an optimal resistance.

In common with carriages and railway locomotives, most early motor vehicles used leaf springs. One of the features of these springs was that the friction between the leaves offered a degree of damping, and in a 1912 review of vehicle suspension, the lack of this characteristic in helical springs was the reason it was "impossible" to use them as main springs.[2] However the amount of damping provided by leaf spring friction was limited and variable according to the conditions of the springs, and whether wet or dry. It also operated in both directions. Motorcycle front suspension adopted coil sprung Druid forks from about 1906, and similar designs later added rotary friction dampers, which damped both ways - but they were adjustable (e.g. 1924 Webb forks). These friction disk shock absorbers were also fitted to many cars.

One of the problems with motor cars was the large variation in sprung weight between lightly loaded and fully loaded, especially for the rear springs. When heavily loaded the springs could bottom out, and apart from fitting rubber 'bump stops', there were attempts to use heavy main springs with auxiliary springs to smooth the ride when lightly loaded, which were often called 'shock absorbers'. Realising that the spring and vehicle combination bounced with a characteristic frequency, these auxiliary springs were designed with a different period, but were not a solution to the problem that the spring rebound after striking a bump could throw you out of your seat. What was called for was damping that operated on the rebound.

Although C.L. Horock came up with a design in 1901 that had hydraulic damping, it worked in one direction only. It does not seem to have gone into production right away, whereas mechanical dampers such as the Gabriel Snubber started being fitted in the late 1900s (also the similar Stromberg Anti-Shox). These used a belt coiled inside a device such that it freely wound in under the action of a coiled spring, but met friction when drawn out. Gabriel Snubbers were fitted to an 11.9HP Arrol-Johnston car which broke the 6 hour Class B record at Brooklands in late 1912, and the Automotor journal noted that this snubber might have a great future for racing due to its light weight and easy fitment.[3]

One of the earliest hydraulic dampers to go into production was the Telesco Shock Absorber, exhibited at the 1912 Olympia Motor Show and marketed by Polyrhoe Carburettors Ltd.[3] This contained a spring inside the telescopic unit like the pure spring type 'shock absorbers' mentioned above, but also oil and an internal valve so that the oil damped in the rebound direction. The Telesco unit was fitted at the rear end of the leaf spring, in place of the rear spring to chassis mount, so that it formed part of the springing system, albeit a hydraulically damped part.[4] This layout was presumably selected as it was easy to apply to existing vehicles, but it meant the hydraulic damping was not applied to the action of the main leaf spring, but only to the action of the auxiliary spring in the unit itself.

The first production hydraulic dampers to act on the main leaf spring movement were probably those based on an original concept by Maurice Houdaille patented in 1908 and 1909. These used a lever arm which moved hydraulically damped vanes inside the unit. The main advantage over the friction disk dampers was that it would resist sudden movement but allow slow movement, whereas the rotary friction dampers tended to stick and then offer the same resistance regardless of speed of movement. There appears to have been little progress on commercialising the lever arm shock absorbers until after World War I, after which they came into widespread use, for example as standard equipment on the 1927 Ford Model A and manufactured by Houde Engineering Corporation of Buffalo, NY.

Most vehicular shock absorbers are either twin-tube or mono-tube types with some variations on these themes.

Also known as a "two-tube" shock absorber, this device consists of two nested cylindrical tubes, an inner tube that is called the "working tube" or the "pressure tube", and an outer tube called the "reserve tube". At the bottom of the device on the inside is a compression valve or base valve. When the piston is forced up or down by bumps in the road, hydraulic fluid moves between different chambers via small holes or "orifices" in the piston and via the valve, converting the "shock" energy into heat which must then be dissipated.

Variously known as a "gas cell two-tube" or similarly-named design, this variation represented a significant advancement over the basic twin-tube form. Its overall structure is very similar to the twin-tube, but a low-pressure charge of nitrogen gas is added to the reserve tube. The result of this alteration is a dramatic reduction in "foaming" or "aeration", the undesirable outcome of a twin-tube overheating and failing which presents as foaming hydraulic fluid dripping out of the assembly. Twin-tube gas charged shock absorbers represent the vast majority of original modern vehicle suspensions installations.

Often abbreviated simply as "PSD", this design is another evolution of the twin-tube shock. In a PSD shock absorber, which still consists of two nested tubes and still contains nitrogen gas, a set of grooves has been added to the pressure tube. These grooves allow the piston to move relatively freely in the middle range of travel (i.e., the most common street or highway use, called by engineers the "comfort zone") and to move with significantly less freedom in response to shifts to more irregular surfaces when upward and downward movement of the piston starts to occur with greater intensity (i.e., on bumpy sections of roads— the stiffening gives the driver greater control of movement over the vehicle so its range on either side of the comfort zone is called the "control zone"). This advance allowed car designers to make a shock absorber tailored to specific makes and models of vehicles and to take into account a given vehicle's size and weight, its maneuverability, its horsepower, etc. in creating a correspondingly effective shock.

The next phase in shock absorber evolution was the development of a shock absorber that could sense and respond to not just situational changes from "bumpy" to "smooth" but to individual bumps in the road in a near instantaneous reaction. This was achieved through a change in the design of the compression valve, and has been termed "acceleration sensitive damping" or "ASD". Not only does this result in a complete disappearance of the "comfort vs. control" tradeoff, it also reduced pitch during vehicle braking and roll during turns. However, ASD shocks are usually only available as aftermarket changes to a vehicle and are only available from a limited number of manufacturers.

Hydraulic shock absorber monotube in different operational situations:
1 ) Drive slow or adjustments open
2 ) Like "1", but extension immediately after the compression
3 ) Drive fast adjustments or closed, you can see the bubbles of depression, which can lead to the phenomenon of cavitation
4 ) Like "3", but the extension immediately after the compression
Note: The volume change caused by the stem is considered.

Absorber with remote-reservoir connected rigidly, compared to most shock absorbers. It uses a diaphragm instead of a membrane, and does not contain a control valve for expansion of the pneumatic chamber.
Description:
1) Sheath and gas tank
2) Stem
3) Snap rings
4) Plate bearing spring
5) Spring
6) End cap and preload adjustment
7) Cap gas, present in versions both with or without gas valve (inverted profile)
8) Mobile diaphragm
9) Pad switch (compression)
10) Wiper
11) Oil seal assembly, and shock seal
12) Negative buffer pad or limit switch (extension)
13) Piston with sliding blades and seal

The principal design alternative to the twin-tube form has been the mono-tube shock absorber which was considered a revolutionary advancement when it appeared in the 1950s. As its name implies, the mono-tube shock, which is also a gas-pressurized shock and also comes in a coilover format, consists of only one tube, the pressure tube, though it has two pistons. These pistons are called the working piston and the dividing or floating piston, and they move in relative synchrony inside the pressure tube in response to changes in road smoothness. The two pistons also completely separate the shock's fluid and gas components. The mono-tube shock absorber is consistently a much longer overall design than the twin-tubes, making it difficult to mount in passenger cars designed for twin-tube shocks. However, unlike the twin-tubes, the mono-tube shock can be mounted either way— it does not have any directionality.[5] It also does not have a compression valve, whose role has been taken up by the dividing piston, and although it contains nitrogen gas, the gas in a mono-tube shock is under high pressure (260-360 p.s.i. or so) which can actually help it to support some of the vehicle's weight, something which no other shock absorber is designed to do.[6]

Mercedes became the first auto manufacturer to install mono-tube shocks as standard equipment on some of their cars starting in 1958. They were manufactured by Bilstein, patented the design and first appeared in 1954s.[7] Because the design was patented, no other manufacturer could use it until 1971 when the patent expired.[6]

Spool valve dampers are characterized by the use of hollow cylindrical sleeves with machined-in oil passages as opposed to traditional conventional flexible discs or shims.[8] Spool valving can be applied with monotube, twin-tube, and/or position-sensitive packaging, and is compatible with electronic control.[9]

There are several commonly used principles behind shock absorption: