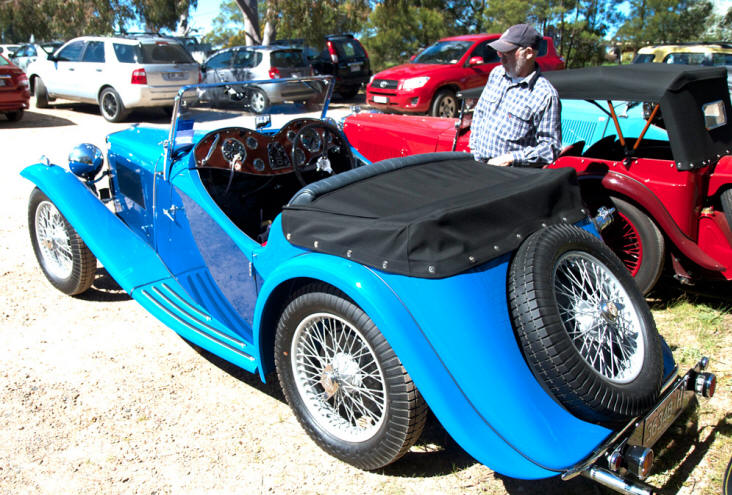 Fortunately the factory files for this NA are reasonably comprehensive for its early years. NA0303 was supplied to University Motors as a green 2 seater in April ’34 and sold to Fitzroy K Chapman from Sussex a little over a month later. Within a week the car was back undergoing major accident repairs necessitating a new chassis, front suspension plus other numerous body and mechanical repairs. A new 6 month guarantee was issued in June of that year.

By late July the car had again returned for attention to problems with the engine and body as well as a request for some additional work. The car now was being used by Stewart P Chapman who requested “SPC to be painted on both doors, with work including improved ventilation to the radiator, double spare wheels and the union jack on the bonnet sides.

More problems occurred with the clutch and steering and additional mods were undertaken during August. A response from the factory in September of 34 said that a K3 exhaust could be supplied but the near side door must remain shut! By the end of the year the car had bucket seats fitted, brakes continued to be a problem and the head had been removed. Much to the disgust of the owner, the factory informed him that the first decarbonising was not free of charge. The car at this stage had only travelled a little over 2300 miles.

The car changed hands some time in the New Year and by May ’35, the Hon R Greville, also from Sussex, had he factory fitting dual fuel pumps as well as attending to brakes, steering and suspension. The car was running on a mixture of 75% benzol and 25% Ethyl, and a week later the car had run a big end on number 3. The owner took the opportunity at this time to respray the whole car black. Clearly the K3 exhaust had been fitted because the exhaust had to be re-lagged where it had damaged the side of the bonnet.

The factory records of this time show that the car was supercharged. He picked up his re-fettled car from the factory at the end of June ’35.

The last series of correspondence between Greville and the factory later in 1935 showed that his address was now Warrick castle, Warrick. After this the last of the factory records lists an enquiry from a R Norris of Brixton querying the steering geometry in May 1939.

From this point on the history of this car is, to say the least, vague. Following is a list of known owners.

Then sometime before 1986, whilst still in the States, a PG Holmes is said to have owned the car. There is also a Ray Milo who was possibly the owner who installed the Triumph engine and gearbox. An NA engine, although not the cars original, was with the car (926AN, ex NA673) at that time.

In September 2001, British Motor Cars of Greenville South Carolina sold the car to Nick Langford and the car was shipped to his workshops in Melbourne Australia. The

triumph lump was gone and another engine (1036 Al 64N) in many bits and badly cracked, followed the car to Australia.

I bought the car in the same state as it arrived into Australia, essentially complete but as a terrible restoration that will necessitate a complete going over. This process has started but there is a long way to go.

I have written this because although I find the early history interesting, it asks more questions than it answers. What were all the modifications for and if it did have some competition history, what? Where? and was the car successful? I just thought some one reading this may be able to shed a little light on the matter.