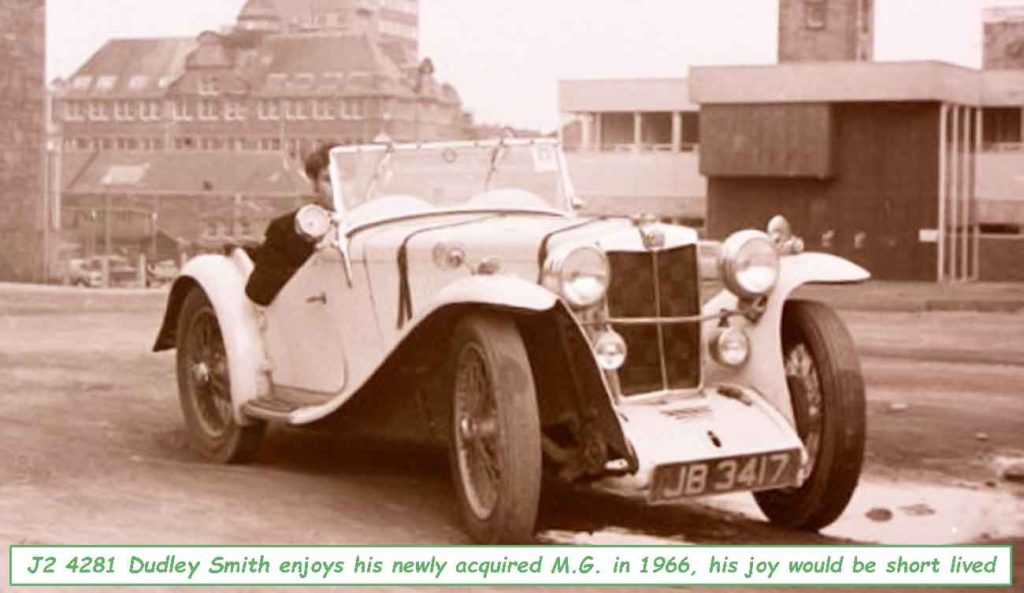 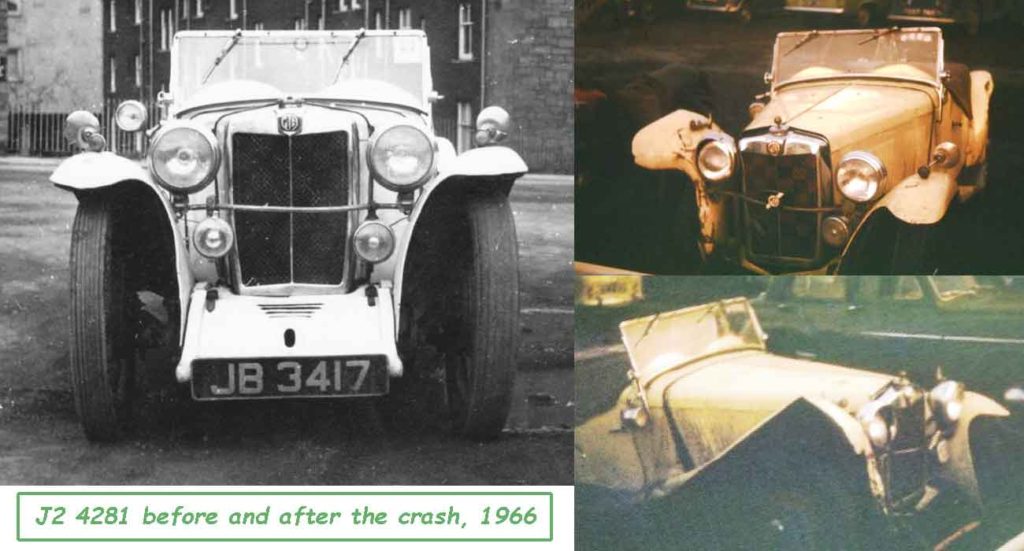 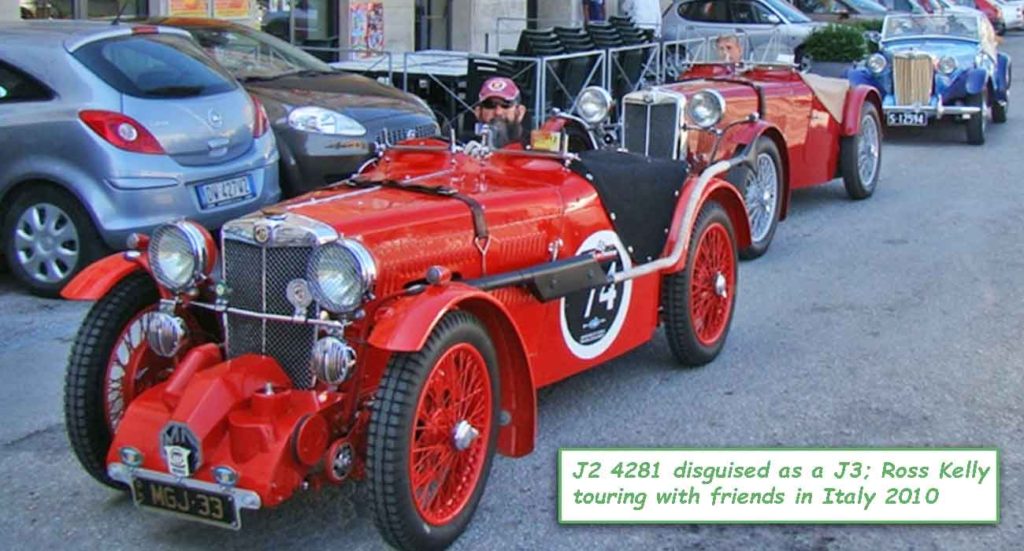 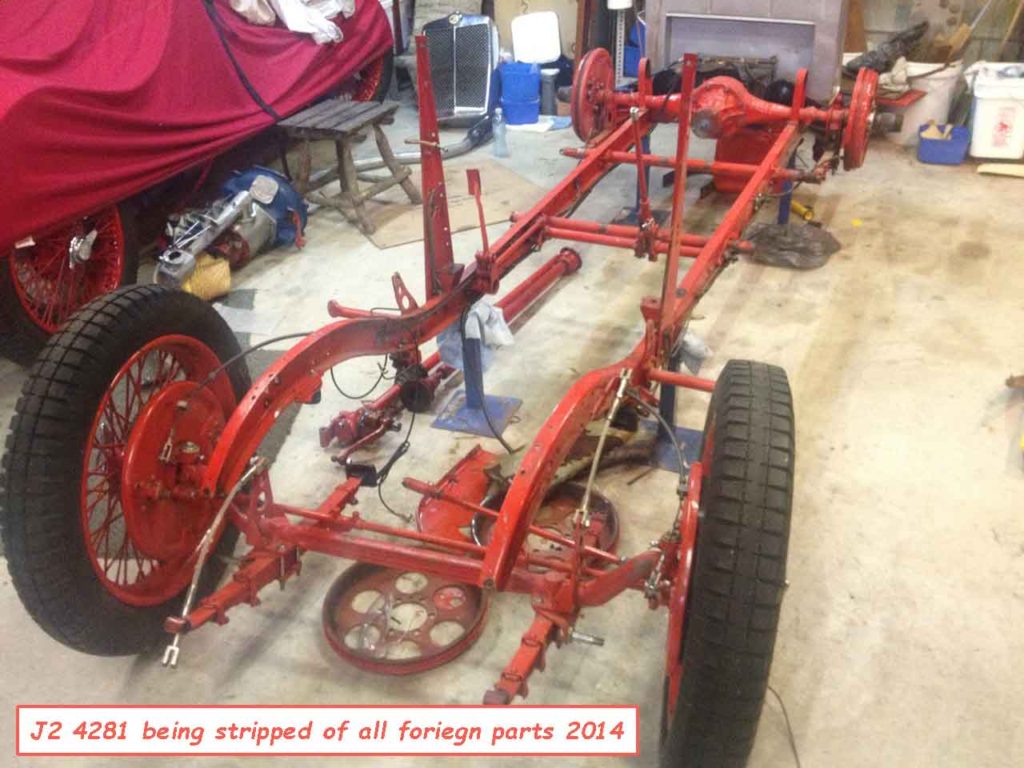 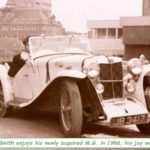 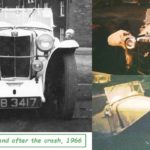 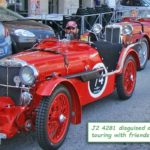 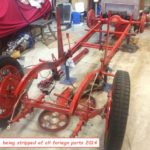 Ruddle returned the car to the factory on 14/2/35 showing mileage of 12317 complaining of clicking rear hubs.  A hard driver…

The next record is when the car was bought by Dudley Smith in London at Easter 1966 for 75 pounds.  The car was now white and sporting wing mirrors and spot lights.  Dudley performed some repairs and used the car to drive from his home in Surrey to his university in Dundee, Scotland.  After some months of enjoyment J2 4281 was heavily damaged by a drunk driver.  Dudley managed to persuade his insurance company to allow him to keep the written-off wreck.  He bought another J2 (click to see file on J2 3418) which was engineless and over the Christmas break managed to build one good car out of the two, using 4281 as a source of parts.

In 1967 Gary Grant, an Australian working in the UK for Jack Brabham, bought J2 3418 and the associated parts and set about enjoying the delights of pre-war motoring.  1968 saw Gary ship 3418, the chassis and parts of 4281 and many other M.G. parts when he returned home to Geelong.  J2 3418 was sold off as a going car to pay Gary’s debts and the remaining parts went into storage.

Having married, had children and established the family home, Gary commenced a restoration in the mid-70s; among the many parts he had accumulated was the battered chassis of M.G. J3 3763 (click to see the file) acquired locally, and this became the nominal subject of the rebuild.  The twist in the tale is that Gary chose to use chassis 4281 because it was in better condition and he substituted the R.H. knuckle from the J3.  By 1981 the build was fairly advanced and the car was sold to Gary’s friend Bill Andrews on condition that Gary would help to complete the car.

The end result was stunning, a cross between a doorless J4 and a J3.  The car won many awards at shows and concours and became well known in M.G. circles across Australia.

In 2003 the car was bought by Ross Kelly still carrying the identity of J3 3763 and it came with the damaged chassis missing its R.H. knuckle.  The significance of the chassis was not explained but with some research and the help of Graeme Jackson, the full story emerged.  All the while Ross was enjoying using the car in all manner of motoring events open to a show standard pre-war M.G. including local Queensland speed events, M.G.C.C. National Meetings and Pre-war M.G. Register Rallies in other states .

Ross also took the car overseas for a jaunt from Italy through Europe to the UK.  The following year he undertook an outback tour with M.G. friends covering many thousands of kilometers.

By 2014 Ross decided the car needed to be refreshed and to return it to its original configuration utilising the original chassis.  The car was despatched to HVR in Blackburn, Victoria; the original chassis was repaired, fitted with its correct knuckle and the body once again received openable doors.

Liberated, chassis 4281 was sold to Graeme Jackson in 2015; Graeme began collecting J2 parts toward recreating the car, to this end he phoned Gary Grant and asked if he still had the missing knuckle, he did and posted it to Graeme to be reunited with the rest of the chassis.